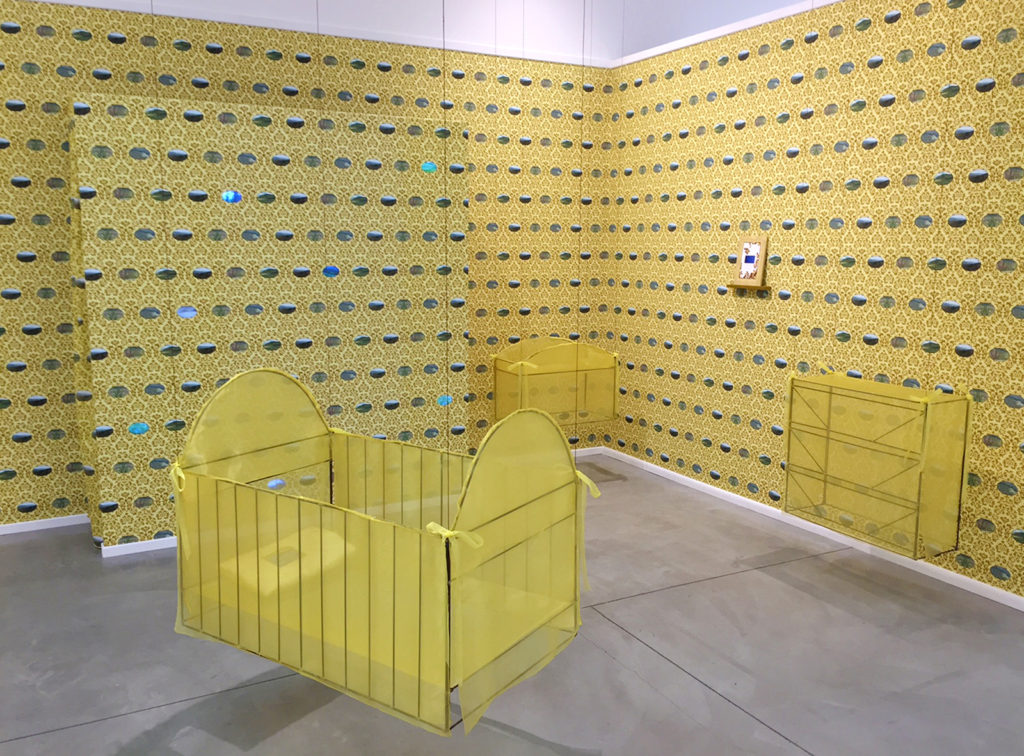 The Video Walls combine the tactile world with illusory space and digital representations.

The idea started in 2006 with the installation, Sweet Dreams, at the Sun Valley Center for the Arts. In this example, the wallpaper pattern is hand-drawn, then combined with photographs and their video counterparts. Similar effects can be generated in a home setting by employing comparable wallpaper designs.

Waiting/Watching (2012) is part of a multi-faceted project by Kim Abeles, "the interconnectedness of things", commissioned by EcoArts Connections, Boulder, CO. The mural has detailed images of lichen that she photographed in the region and is animated by dozens of videos featuring the eyes of local children and the traffic in their Boulder neighborhood.

Lichens are used in the lab as bio-monitors to measure air pollution. They can be hundreds of years old and are witnesses to humankind's efforts and foibles.

The project created connections between community, art, science, mass commuting, lichens and air pollution. The exhibits were presented at four venues, including the waiting room for people of the vehicles emission-testing facility, the National Center for Atmospheric Research, CUNHM, and Manhattan Middle School where Abeles worked with students to create Smog Collectors.

Link to further text and images 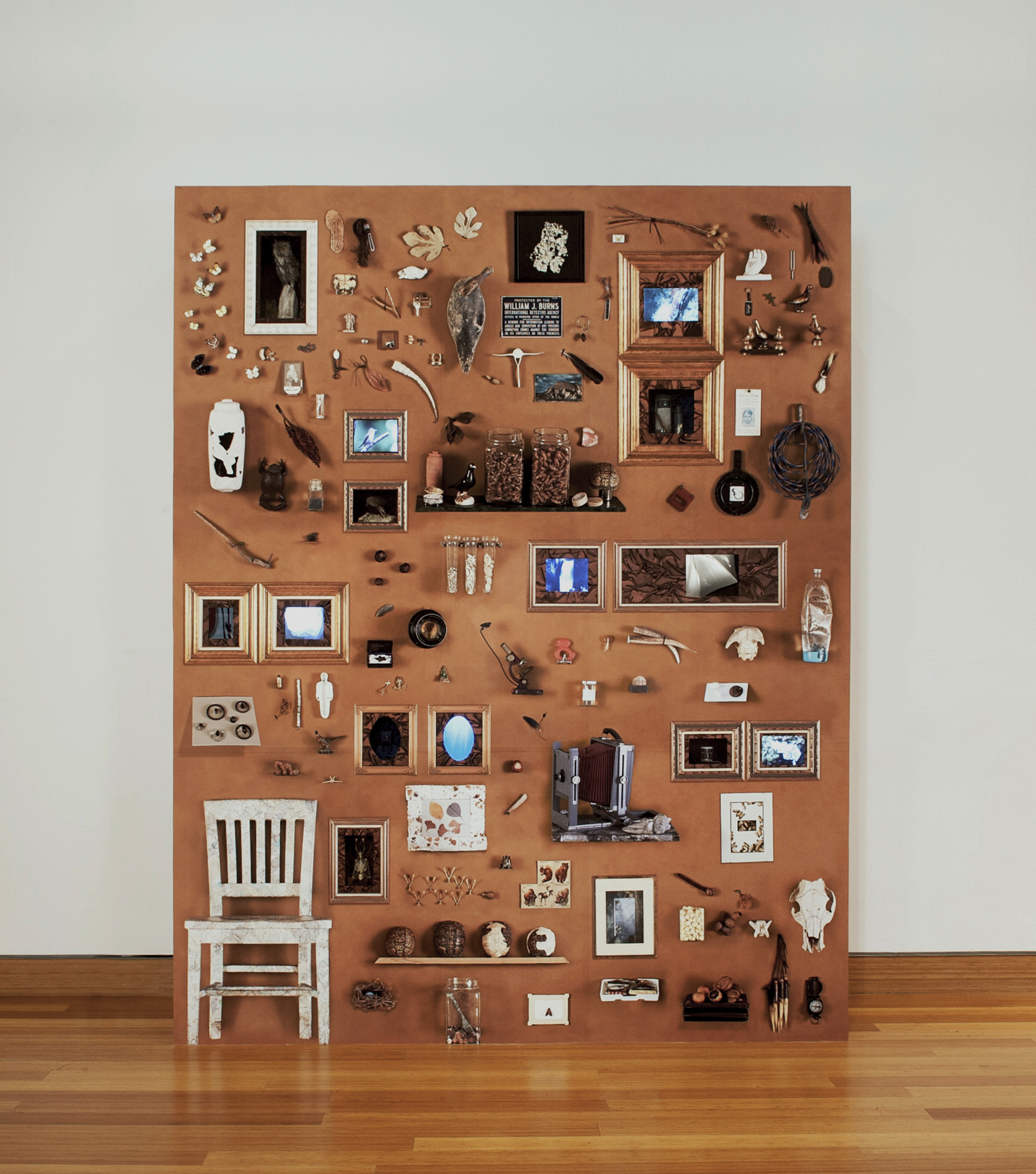 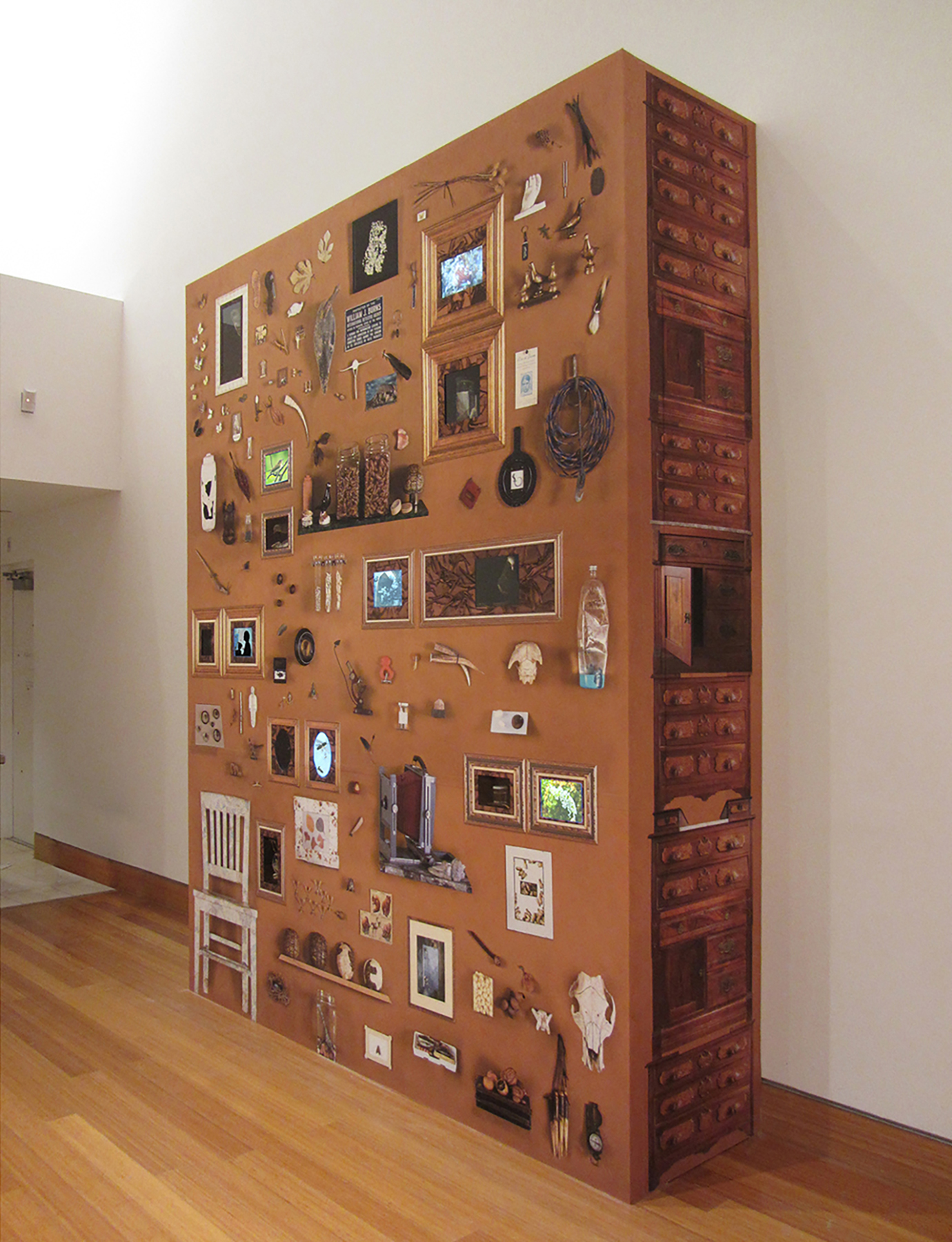 Cabinet of Wondering brings together a wall covered with a large photograph of objects that I have collected over many years. Embedded in the wall are video monitors and cases for specimens on loan from the Natural History Museum of the University of Florida. Cabinet of Wondering expresses the urge to separate objects from their surroundings, and then bring them together on a shelf, in the box, in our imagination. Throughout human history, people have collected objects—specimens, spiritual talismans, souvenir pencils, family remembrances—in an effort to possess, reaffirm their existence, and to connect with the “natural world”.

The flatness of this Video Wall is emphasized when the surface is a trompe l'oeil image. The reference to Joseph Kosuth's One and Three Chairs (1965) points to the essence of Cabinet of Wondering: levels of meaning, where each in their own way, are not any more real than the other.

During 2014-2015, Cabinet of Wondering was on view at the Harn Museum of Art in the exhibition, Technology & the Natural World, curated by Kerry Oliver-Smith, Curator of Contemporary Art for the Harn, and Sean Miller, Associate Professor at the University of Florida.

Thank you to the following videographers and institutions for use of their film and digital footage within the sculpture:

Song Birds as Neighbors (1920-29); Courtesy of the collection of the Prelinger Archives, San Francisco; Filmed by William F. and Irene Finley for Bray Studios, Inc. 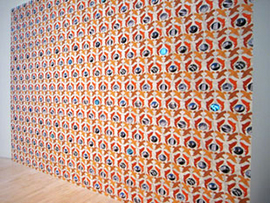 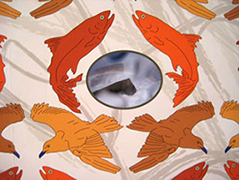 The video wall contains Abeles' drawings and photographs with embedded videos and sound of Niagara Falls. The ten videos are flush to the wallpaper. The installation was first shown at the Armory Center for the Arts, Pasadena, CA in the exhibit curated by Noel Korton, "Touched: Artists and Social Engagement".

Women and Water (1 minute = 6 hours) (2012) was created for the exhibition, (re-) cycles of Paradise, curated by ARTPORT_making waves, and first exhibited at Los Angeles Contemporary Exhibitions (LACE) in cooperation with swissnex San Francisco.

The embedded videos are presented in pairs with the first in real time and for the second, one minute of footage is slowed to 6 hours.

Link to further text and images 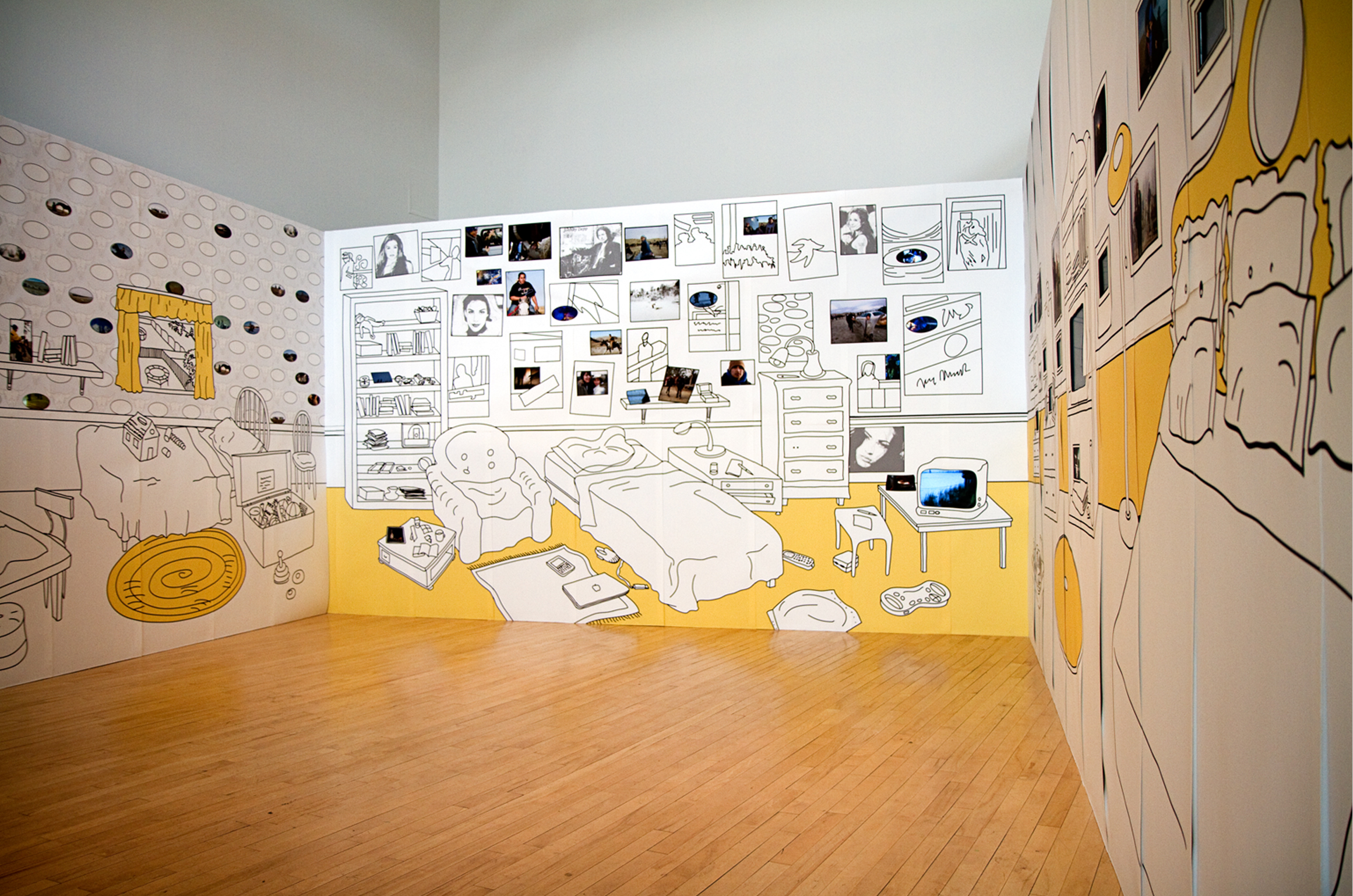 The collaborative team of Kim Abeles and Ken Marchionno created this mixed media installation using drawing, video, and still images to interrogate the way American Indians are viewed in contemporary society. The installation employs full-scale drawings of three bedrooms that are mounted as wallpaper, each room representing a different stage in life—child, adolescent, adult. With 30 embedded videos, and images taken from pop culture and documentary practice, the rooms combine to offer a trajectory of representation. The piece was first shown at the Armory Center for the Arts, Pasadena, California.

The photographs in the installation are selections from Ken Marchionno’s major project, 300 Miles -The Oomaka Tokatakiya Future Generations Ride. To find out more about this project you can see it on his website: 300-miles.org. Next year at the Museum of Art and History in Lancaster, California, a major exhibition of Marchionno's photographs from 2004-2019 will be exhibited in the main gallery in early 2021.

And you can also see more about the ride and photographs through Future Generations Teen Photo Journalism on the website: teenphotojournalism.org