Kim Abeles is an artist whose artworks explore biography, geography, feminism, and the environment. Her work speaks to society, science literacy, and civic engagement, creating projects with the California Science Center, health clinics and mental health departments, and the National Park Service. Her collaborations with air pollution control agencies involve images from the smog, and largescale projects with natural history museums in California, Colorado and Florida incorporate specimens ranging from lichen to nudibranchs. In 1987, she innovated a method to create images from the smog in the air, and Smog Collectors brought her work to national and international attention. National Endowment for the Arts funded two recent projects: as artist-in-residence at the Institute of Forest Genetics she focused on Resilience; and, Valises for Camp Ground: Arts, Corrections, and Fire Management in the Santa Monica Mountains were made in collaboration with Camp 13, a group of female prison inmates stationed in the Santa Monica Mountains who fight wildfires. She has received fellowships from the Guggenheim Memorial Foundation, J. Paul Getty Trust Fund for the Visual Arts, California Community Foundation and Pollack-Krasner Foundation. Her work is in forty public collections including MOCA, LACMA, Berkeley Art Museum, Brooklyn Museum, California African American Museum, and the National Geospatial Intelligence Agency. Abeles’ process documents are archived at the Center for Art + Environment, Nevada Museum of Art. 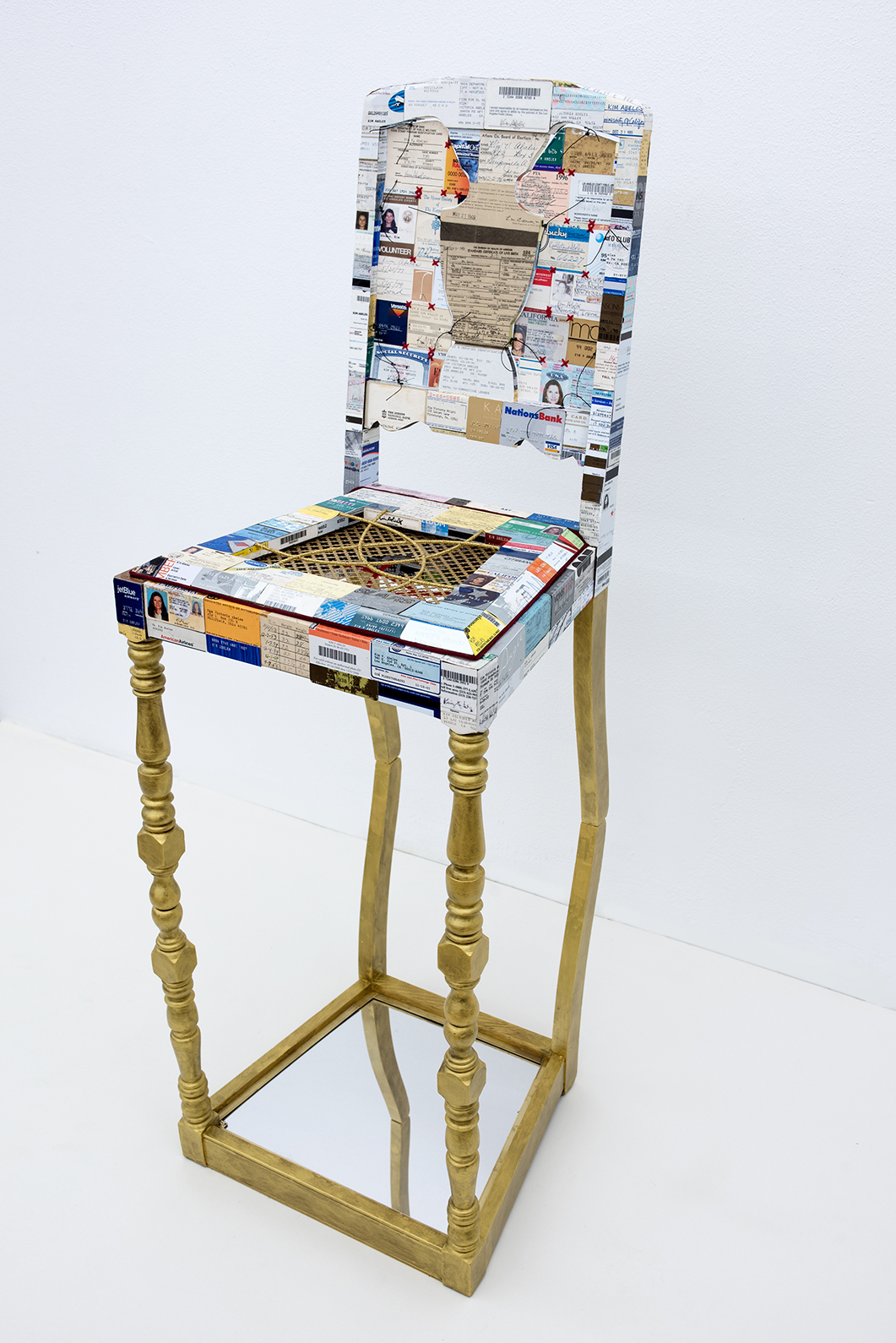 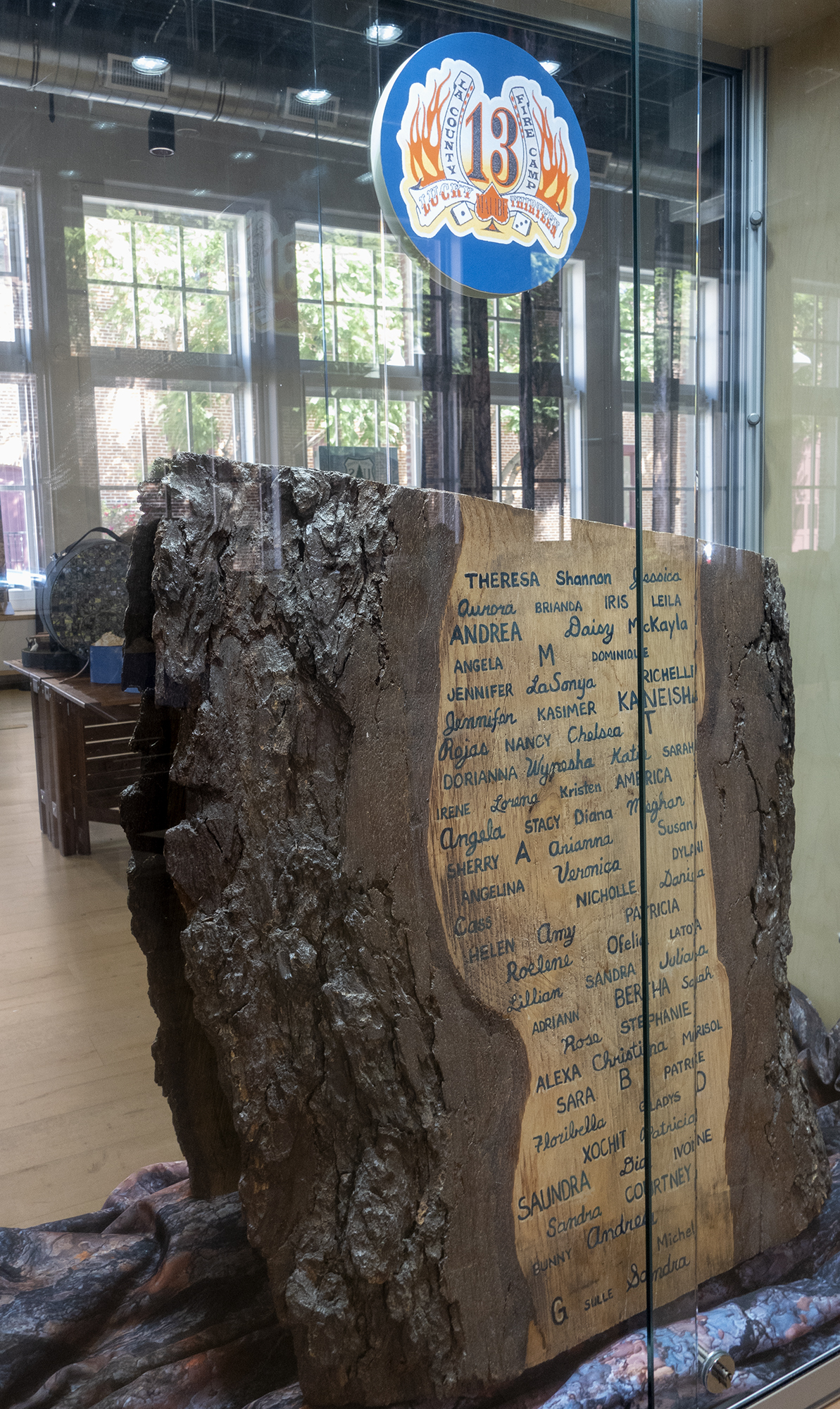 The female inmates at Camp 13 who have been trained as firefighters supplied the content for the valises through their experiences with firefighting and fire abatement methods. 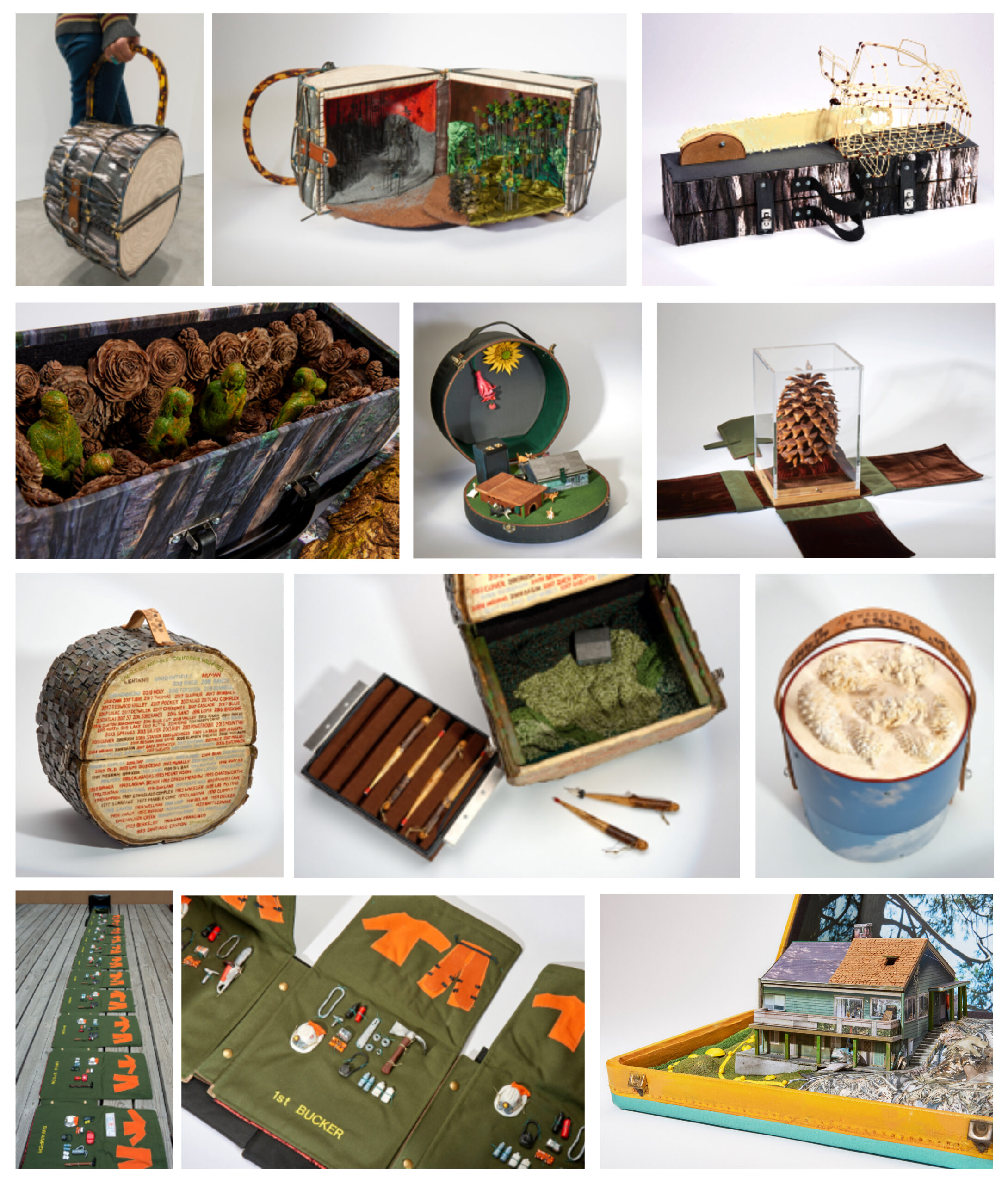 Valises for Camp Ground: Arts, Corrections, and Fire Management in the Santa Monica Mountains Funded by the National Endowment for the Arts, Los Angeles County Arts Commission, and led by The Armory Center for the Arts

The ten sculptural and instructional valises were created for use by the National Park Service and the Los Angeles County Fire Department to teach about fire prevention, national forests, and our relationship as part of nature. Each valise has a theme with specific talking points, and all of them circle back toward teaching issues about fire abatement and our connection to wilderness. These are taken to community groups, events, schools, and venues as teaching tools for discussion about causes and prevention.

The female inmates at Camp 13 who have been trained as firefighters supplied the content for the valises through their experiences with firefighting and fire abatement. The process was organic in the sense that there was a two-way conversation between Kim Abeles as artist-in-residence and the inmates for the development of the valises. Along with the talking points, the firefighters also responded to the artistic, content-driven outcomes. Participants worked alongside as well as with the artist on the elements of the valises. In this way, learning a variety of sculptural skills was an aspect for the workshops, and important to the process,  the women also taught each other while sharing skills.

Link to Liz Ohanesian's article in Los Angeles Magazine, "This Artist Enlisted Female Inmate Firefighters for a Show about Our Fragile Environment."

Americans for the Arts honored the project that embedded Abeles in Los Angeles County Fire Department's Malibu Conservation Camp #13. You can link to the award information here.

And link here for a blog post written by Abeles for the American for the Arts. 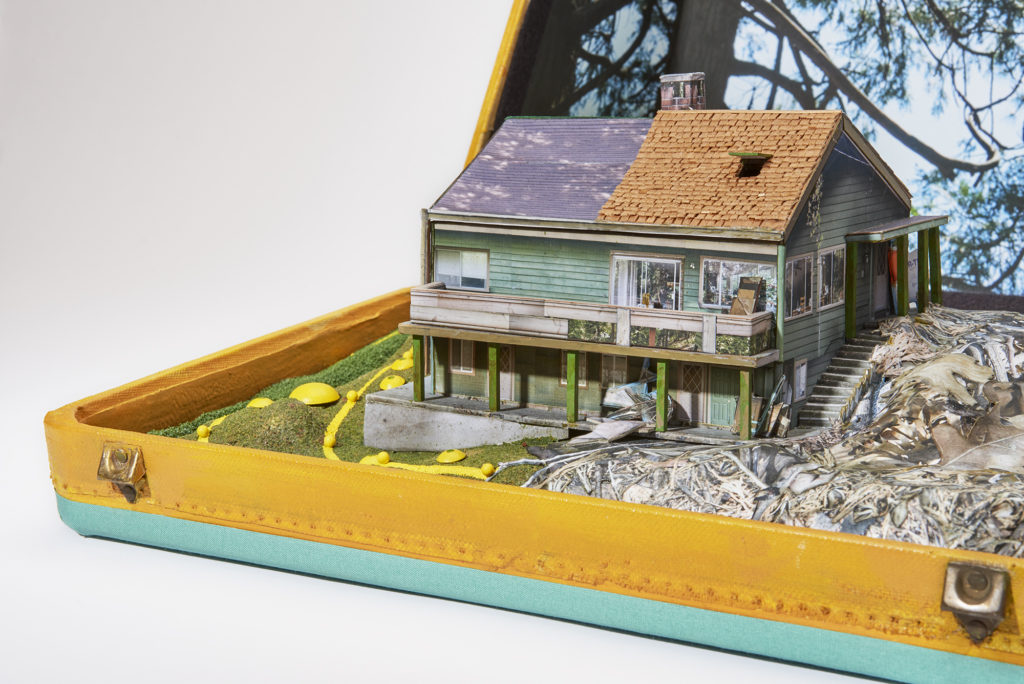 GROUP EXHIBITIONS and PUBLIC ART IN 2021

Citizen Seeds, Commissioned by Los Angeles County Arts and Culture; This permanent public art will be installed in 2021 along the Park to Playa Trail. The six sculptures will be placed along the entrance at Stocker Corridor and eastern section located near Kenneth Hahn Park, and along the trail to the Scenic Overlook near Culver City. The entire Park to Playa Trail is a 13-mile series of connected trails and extends to the Pacific Ocean. 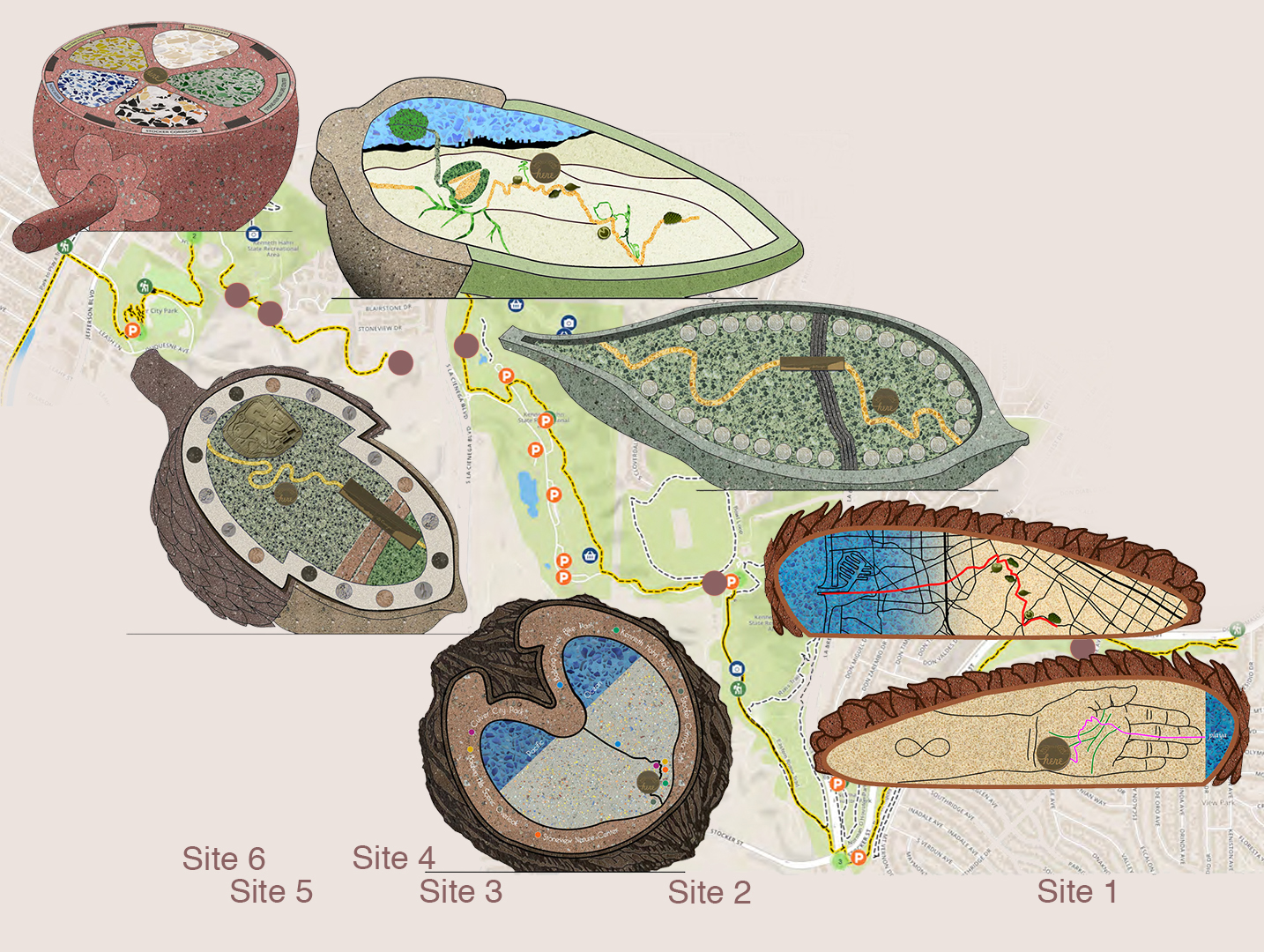 The permanent, exterior installation of Sky Leaves is a commission through Percent for Public Art and is an artwork for a mixed-Use building designed by LCRA Architecture and Planning. The leaves are selections from the oldest living trees currently found on earth. Each tree is at least 1000 years old, and clonal trees are 80,000 years old. Each is surfaced with a photograph of a sky from the region where the tree is located. 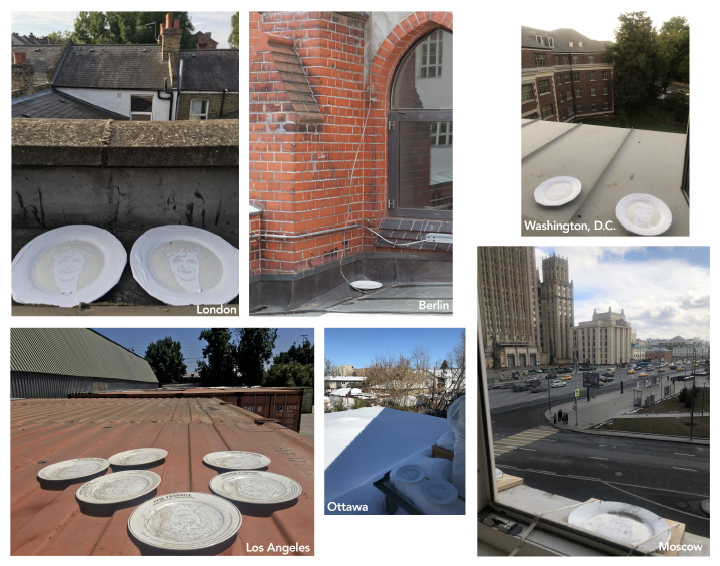 World Leaders in Smog in process at their capitals

Nearly thirty years since the Presidential Commemorative Smog Plates, Abeles revisits her Smog Collectors to address the current state of our environmental crisis globally. The latest of the series depicts ten world leaders who presented speeches at world climate summits from 2011 to 2018. The quotes are written on the plates in the language originally presented. Stenciled plates collected smog in Moscow, Paris, Washington D.C., London, Ottawa, London, and Los Angeles. World Leaders in Smog was created in collaboration with the Garage Museum of Contemporary Art, Moscow, for their exhibition, "The Coming World: Ecology as the New Politics 2030–2100", curated by Snejana Krasteva and Ekaterina Lazareva.

World Leaders in Smog will be on view at Expo Chicago, September 19-22, 2019.  This special exhibition and panel discussion is sponsored by the Natural Resources Defense Council and the Garage Museum of Contemporary Art, Moscow.

In the Sunshine of Neglect: Defining Photographs and Radical Experiments in Inland Southern California, 1945 to the Present, Curated by Douglas McCulloh, California Museum of Photography and Riverside Art Museum (catalog) 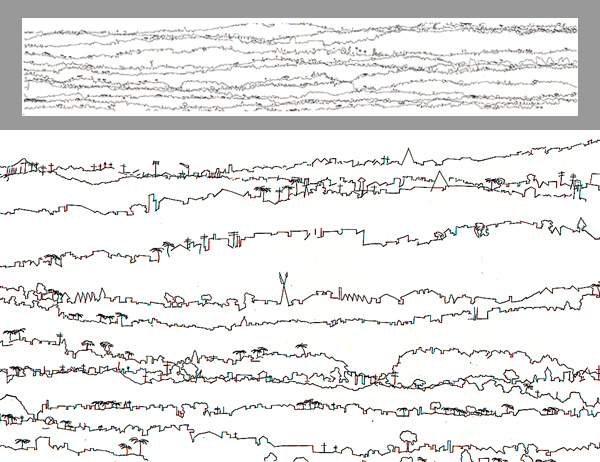 A Mile a Minute (LA to Del Mar as Seen from a Moving Train) (1986); on view in the exhibit curated by Mario Ybarra Jr. and Karla Diaz of Slanguage, "Call and Response, When We Say…You Say", at the California State University Long Beach Art Museum. Collection of CSULB Museum of Art 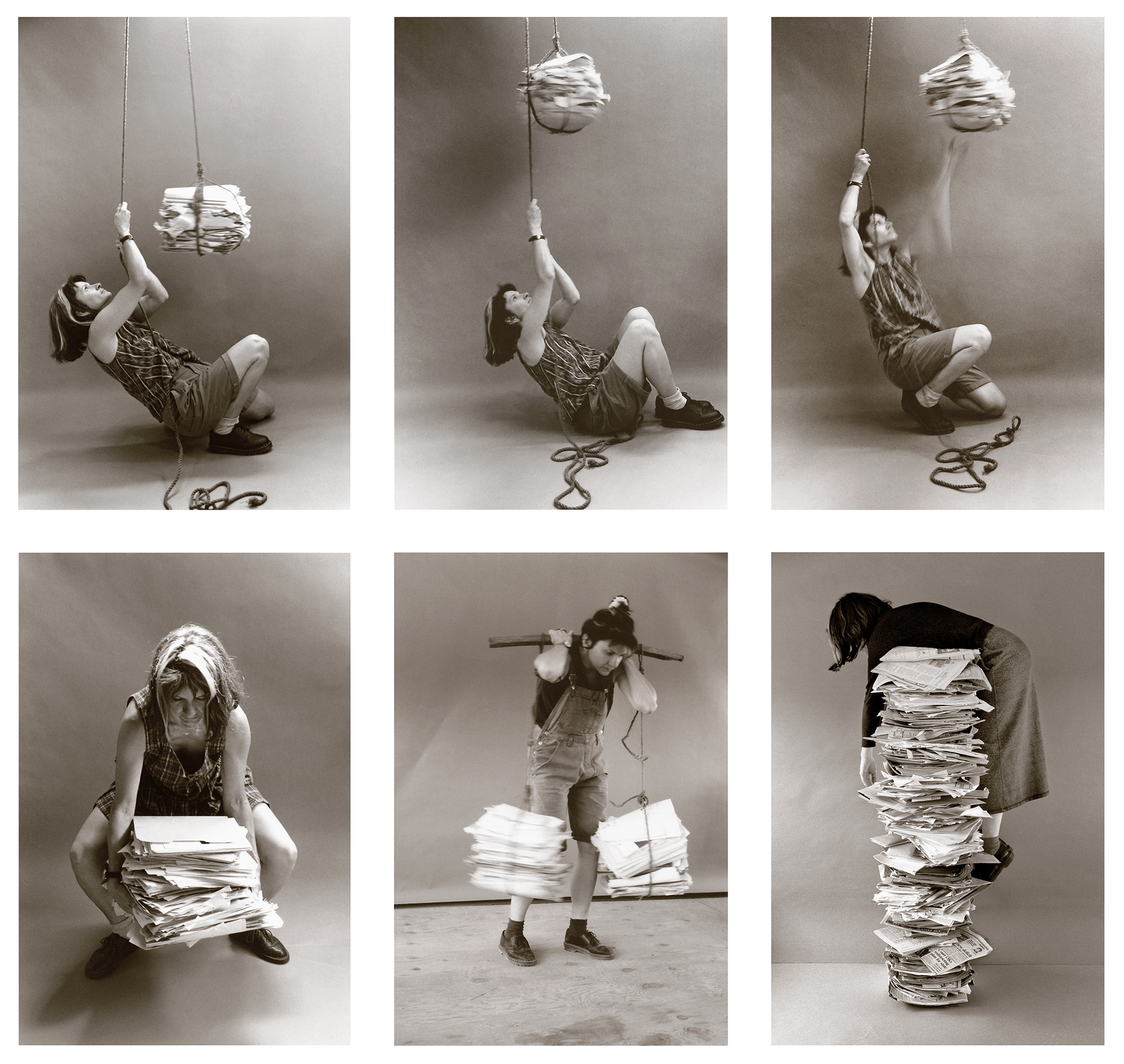 Self-Portraits with Files (1995/2020); on view in the exhibit, Access, curated by Ani Ohanessian, Ara Oshagan and Anahid Oshagan at ReflectSpace Gallery, Glendale CA 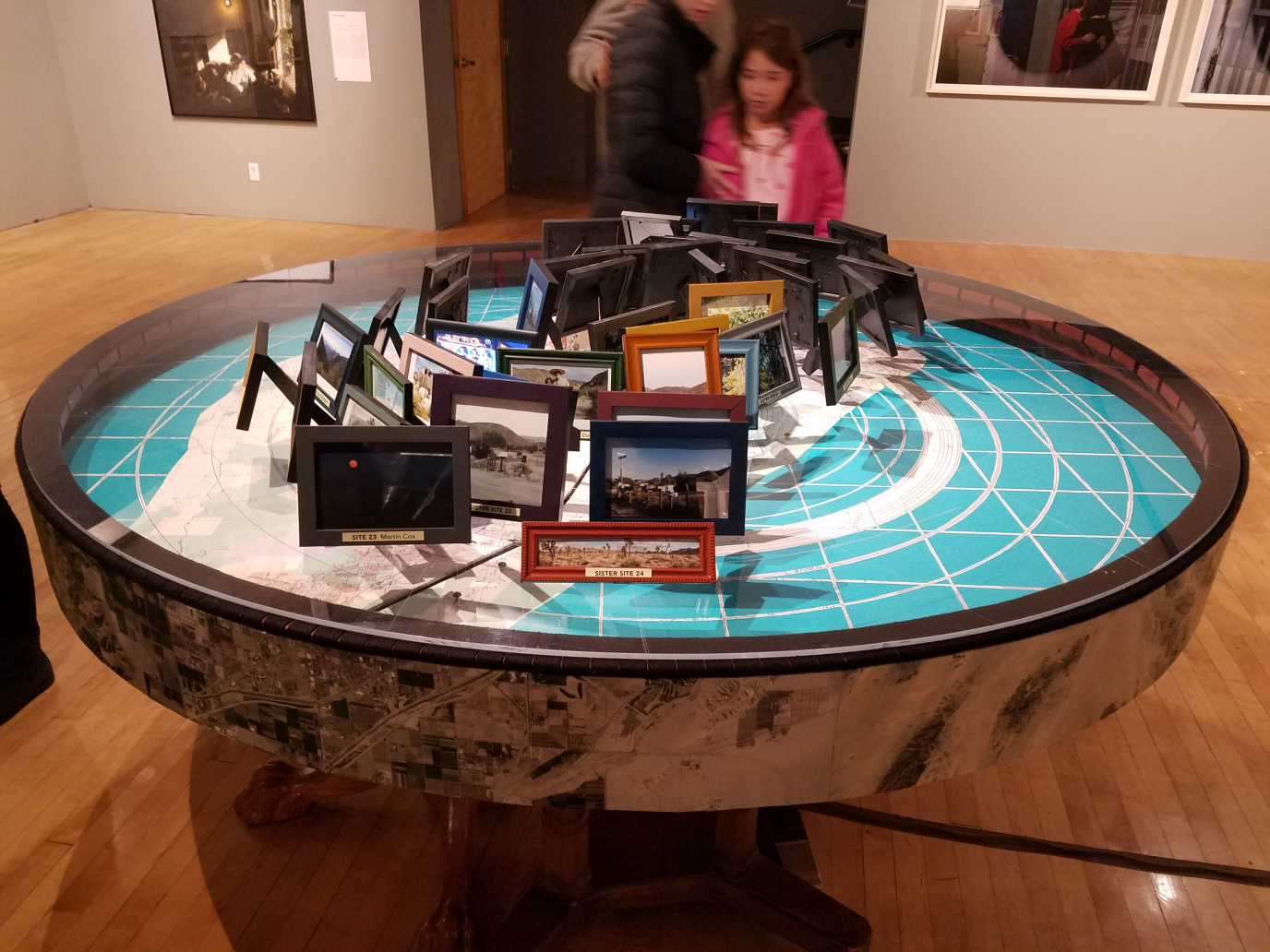 The Map is a Legend (Equidistant Inland Empire)

The Map is a Legend (Equidistant Inland Empire) 2018
7” diameter sculptural table showing the Inland Empire and the San Andreas Fault Line as a painted and incised digital map. The tabletop displays framed photos of the area taken by individuals. Abeles then located each site and its sister site that is equidistant from the centerpoint, a spot along the Fault Line.

I took off in my car with a full tank of gas to find specific sites in the Inland Empire. When I got within the proximity of the San Andreas Fault Line where it intersects Mill Creek Road, I expected to see a sign, maybe literal or geological. I asked a man in a truck parked

along the road, and he said, “People come all the time looking for the fault; it’s somewhere between here and a road to the south.” Like a mirage or the elusive, here, the tangible is just beyond the grasp.

Now Mystic Lake. A complete sentence or a full conjecture is created just by saying that name. Once again, when I started on my search for it in the Inland Empire, maps and GPS only tempted me toward it. Sitting on the side of Gilman Springs Road, looking toward where the lake should be, the endless trail of speeding cars and trucks pushed and pulled the soft field grass separating me from my sight line. Back at the studio, an aerial view revealed the ghost of Mystic Lake, the echoes of its original perimeter, and a small eye of water at the other end from its tail.

Both Mystic Lake and the Andreas Fault Line were among a dozen locations where regional scholars, writers and artists consider the center of the Inland Empire. Other center points, for instance, have philosophical or spiritual cores: UC Riverside and the Riverside Public Library, The Arrowhead in the San Bernardino Mountains, or Poetry Night at Back to the Grind. The center points vary by as much as 30 miles in all directions, and by defining these with concentric circles, the boundary of the Inland Empire is implied, and looks like competing Venn diagrams.

When I was in search of the San Andreas, I showed a man my map of the Inland Empire, and his first comment was that Adelanto wasn’t included. He said, “Adelanto is where you go to die.” When I asked if that was a saying (like the Japanese version, “See Nikko and die”), he said that “Apple Valley is where everyone is all happy, and then Victorville is where the mall is, and Adelanto, well, everything is gray.”

Again back at the studio, Adelanto became an important location, and my personal goal was to make sure it held its place in the map I was creating. Checking online, the Google side bar for the town shows a gray house swallowed by desolation and punctuated by a blue and green trash cans. The city boundary looks like a hieroglyph. But digging further, there are many photos of this city’s sign:

Welcome City of Adelanto
THE CITY WITH UNLIMITED POSSIBILTIES

I have no room in my heart for cynicism though surrounded by it in my profession and politics. Adelanto’s city sign represents the hope and dignity that we hold to appreciate life. My journeys as a visitor to these sites and sister sites, unfold intangible places that hold memory and yes, possibilities. Held in the framework of a table, photography, and sculptural vessels is the Inland Empire as I would seek it, like trying to grasp in my hand the spots floating from my eyes. The Map is a Legend (Equidistant Inland Empire) embraces a hypothetical journey.