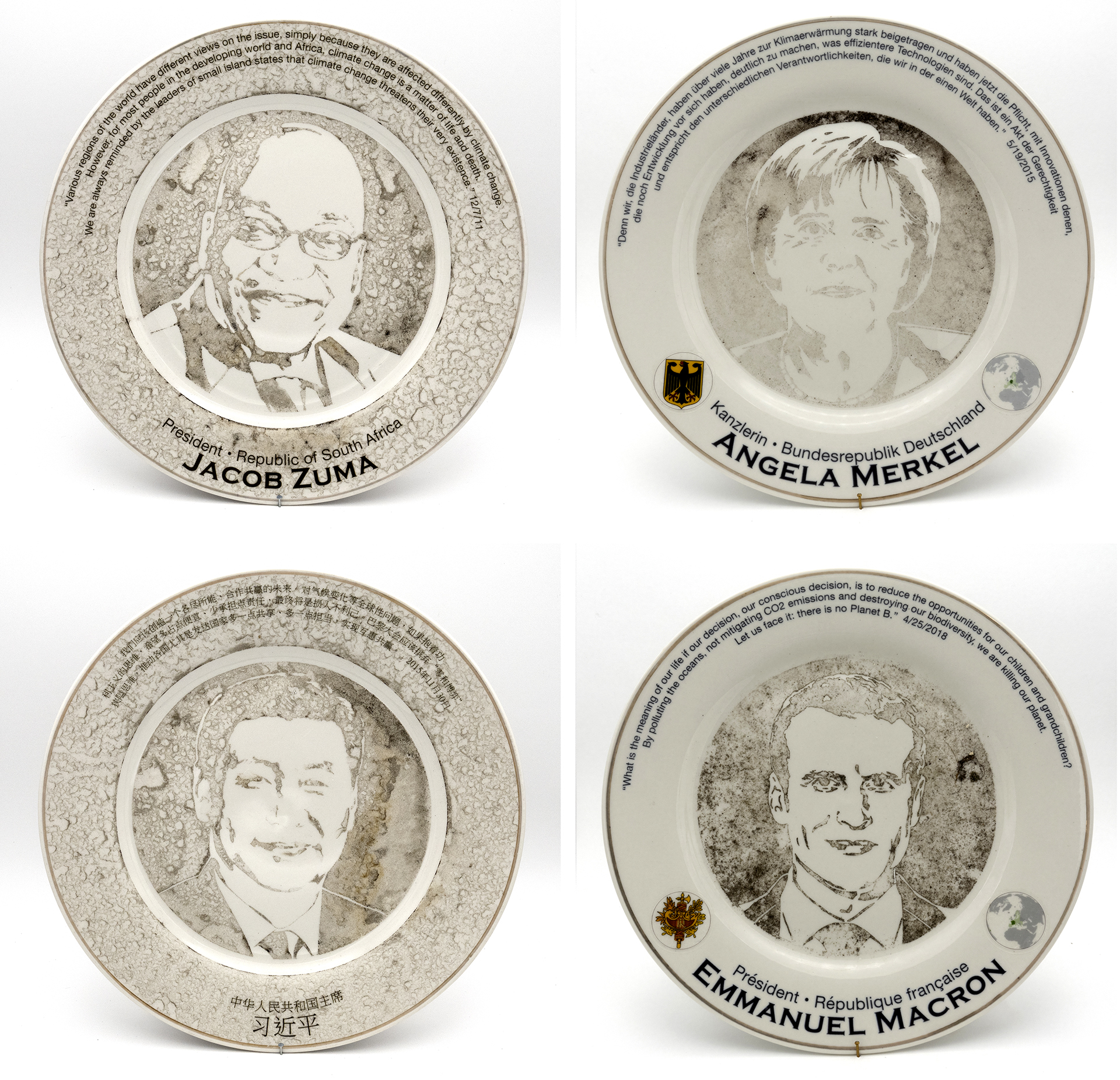 Urban air quality is extremely poor. Unnoticed every day, we inhale soot, nitrogen oxides and poisonous particulate matter, of which we ourselves are the producers. In response, Ceramic Art London 2022 is hosting ‘On Air’ an exhibition and series of live events investigating the urgent topic of air pollution.

The exhibition will be staged during the fair’s run from 8th – 10th April in The Crossing, at Central Saint Martins’ public foyer, open to the general public at the entrance to the CAL. Curated by Dutch design-duo, Smogware (Iris de Kievith and Annemarie Piscaer) and London artist Jo Pearl, the exhibition will investigate the problem of air pollution using smog dust, clay, glaze, ceramics and clay stop-frame animation to make visible and tangible this invisible poison. ‘On Air’ aims to provoke discussion and debate – to be a call to action.

The exhibition will feature work by five international and British artists: Smogware’s provocative teacups coloured with smog-stained glazes, Kim Abeles’s challenging work allowing ambient particulate dust to fall on commemorative plates revealing portraits of world leaders and their pledges on air quality. The show will also include work from glaze specialist Linda Bloomfield who has been representing lichen in glazes, as early-indicators of air pollution, Jasmine Pradissitto who sculpts in Noxtek, a ceramic geopolymer capable of absorbing nitrogen dioxide and Jo Pearl who combines ceramics with clay animation to bring the topic of gasping for breath to life. On Air will also feature the Air Lab – a place for informal discussion where visitors can hear about how the work has been made, how the works and glazes can be ‘read’, with more information to inspire makers to get involved with an expanding international network of artists exploring the problem. Smogware will also be staging live events, timings for which will be confirmed soon, and announced on the Ceramic Art London website. 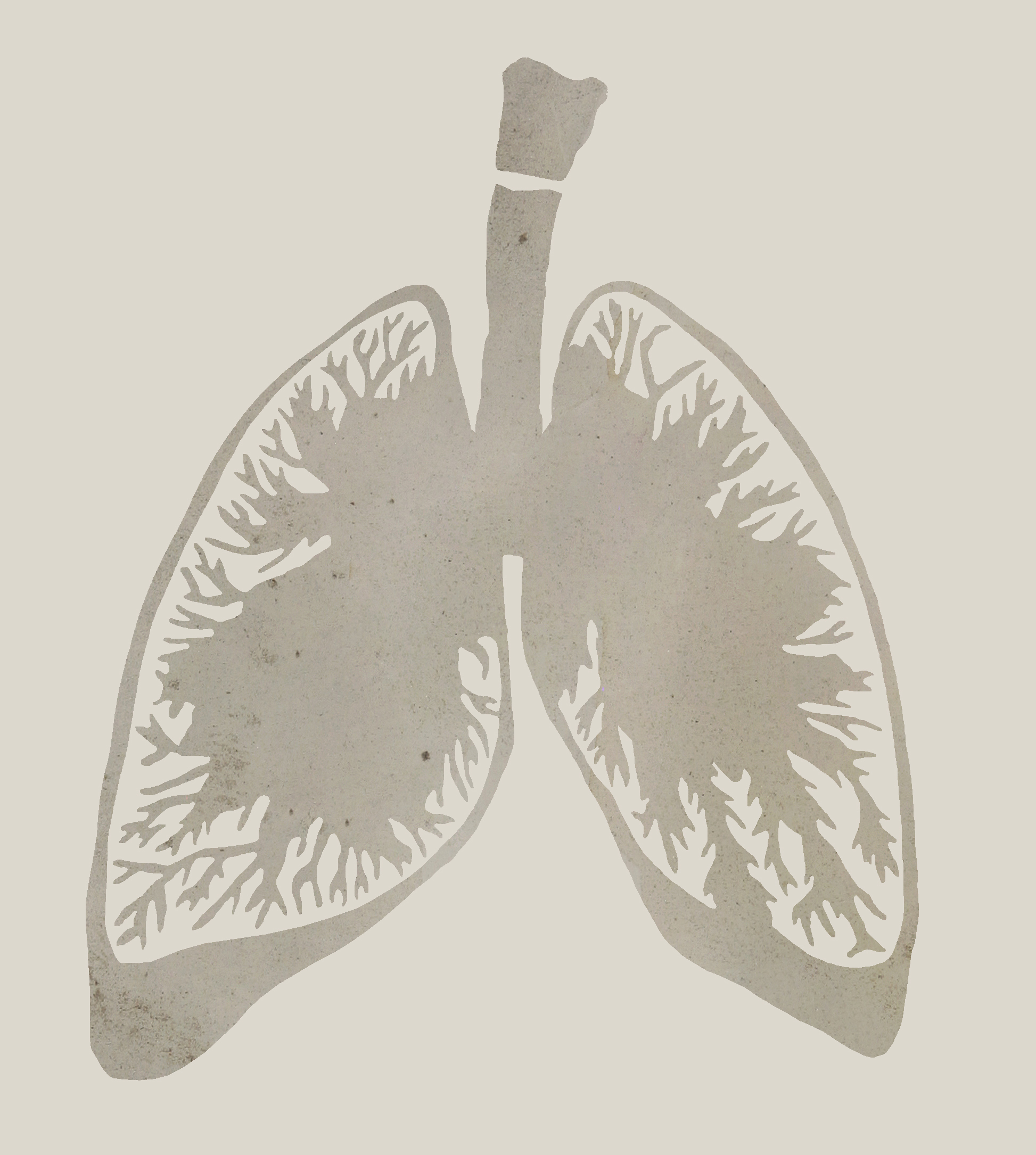 More about the artists and press release details:

Kim Abeles is a California-based artist who has been exploring the issue of air pollution for over thirty years. Her series of Smog Collectors began in 1987 and has involved collaborations with US air pollution control agencies. The innovation earned Abeles American and international attention. She has received fellowships from the Guggenheim Memorial Foundation and J. Paul Getty Trust Fund. We are delighted that she is updating World Leaders in Smog for Ceramic Art London with Sadiq Khan as the latest politician to be featured in her powerful series of commemorative plates with portraits revealed in smog dust and quotations from their speeches about the environment. She will also be presenting Lungs in Smog - stencils of lungs revealed by particulate matter that has landed on panes of glass. These are strategically placed in pollution hotspots around London, including the A205 south circular, which runs close to the home of Ella Kissi-Debrah, the nine-year-old who died of asthma in 2013.

The London Globe printed a new word – ‘smog’ – coined in a speech at the 1905 Public Health Congress. They considered it a public service to describe this phenomenon.

‘Smog Collectors’ materialise the reality of the air we breathe. I place cut, stencilled images on transparent or opaque plates or fabric, then leave these on rooftops and let the particulate matter in the heavy air fall upon them. After a period, from four days to a month typically, the stencil is removed, and the image is revealed in smog. To quote a stranger who saw my first experiments, they are ‘footprints of the sky’. — Kim Abeles

Linda Bloomfield is a master of ceramic glazes, and specialises in thrown porcelain. Her installation for Ceramic Art London 2022 highlights the ebb and flow of Lichen – the canary in the coal mine of the plant world – drawing our attention to lichen as an early warning system for the impact of climate change and air pollution. This unobtrusive plant can only thrive in clean air – and so when it declines, is an indicator of the presence sulphur dioxide, nitrous oxide and ozone in the air we breathe. Air pollution also causes a gradual decrease in the diversity of lichens. Linda brings to CAL a series of organic forms based on stromatolites and fungi. At first the lichen-affect glazes cover the forms abundantly, then gradually decrease until the forms are dark and barren. She uses crawl glazes in ochre, viridian green and chalk white to represent the lichens.

A scientist before turning to ceramics, Bloomfield brings a rigorous methodology to how she develops and tests glazes, and she has authored numerous books on glaze recipes and effects. Her work has been exhibited widely in the world of design and craft. This is her first time exhibiting at CAL.

Gasping for Air is a new series of work by Jo Pearl whose practice combines sculpting and ceramics with clay stop-frame animation. It investigates what it looks and feels like to gasp for breath - due to air pollution’s effect on vulnerable lungs.

Jo Pearl’s work is both figurative and abstract, haptic and tactile. Although fundamentally a ceramicist, she brings the clay to life, creating an illusion of movement by photographing each iteration of her evolving clay forms and editing the still images into a film. She uses professional software to create high-definition animations that can be projected at large scale, amplifying the impact of her narratives. Pearl sculpts using her own recipe of paperclay, keeping the work damp throughout the long sculpting process. Cellulose in the paperclay draws in the added moisture, so that the material remains plastic and flexible, but is also strong enough to kiln-fire at the end of the shoot when dry. The transformation of clay into ceramic in the kiln, is a vital dimension to the work, slowing it to a standstill, and allowing viewers to look at the final 3D forms in the round. There is permission to stare, space to experience the fleeting and a sense of the timeless.

‘I love that these two outcomes offer me a way to celebrate clay’s intrinsic qualities – its endless flexibility when wet, while timelessly set in stone when fired. Another added benefit is I am able to reduce the amount of kiln-firings I need to get my message across, and so minimise my fossil fuel consumption. This seems particularly appropriate for work about the problem of air pollution.’ — Jo Pearl

Dr. Jasmine Pradissitto is a London-based artist, scientist, and academic whose art practice focuses on environmentalism, sustainability, and how mythopoetry creates new narratives for our future, by remembering our collective past.

She is the sole artist licensed to work using a ceramic geopolymer that absorbs up to 15% of its weight of nitrogen dioxide pollution from the air, after pioneering its use as a sculpting material for the last five years.

Pradissitto has exhibited in over 65 shows worldwide, won the PEA Arts award in 2021 for Pioneering Art and the DEFRA Bees award in 2020. She has just been commissioned by The Ella Roberta Foundation to create a sculpture memorialising Ella, a nine-year-old child whose tragic ‘death by pollution’ was the first-ever to be recorded on a death certificate.

She is presenting Famine and Pestilence at CAL. Two works of the ‘Four Horsemen’ which prophesied the ‘end of days’. It serves as a reminder that, in what is arguably an Anthropocene geological era, it is the ‘anthros’, the human at its centre, whose hubris has forgotten their place in a delicate ecosystem which has taken billions of years to evolve the oxygen we need to survive.

Famine presents supplicating cupped hands, holding up an asthma pump, made from the innovative Noxtek. It was inspired by her son’s asthma attack several years before and juxtaposes the polymer’s marble-like white aesthetic so reminiscent of Greek and Roman sculptures in a classical pose, with the cast of an asthma sufferer’s ubiquitous life-saving inhaler. According to Asthma UK, one in eleven children and one in twelve adults are currently receiving asthma treatment. The asthma pump is an unwelcome contemporary icon of our progress.

Dutch architect Iris de Kievith and designer Annemarie Piscaer have come together to create Smogware.org, a public-engaging project to provoke debate and behaviour change towards cleaning up our air quality. Together they found a way to harvest smog dust and use it to stain glazes. The particulate matter makes visible and tangible the poor air quality that surrounds us. They have adopted tableware as the canvas for their smog glazes: the humble plate, cup and saucer, intimately linking three of life’s sustaining actions: breathing, drinking and eating. A dimension of the project includes ‘participative urban mining’; sharing with citizens how to harvest their local dust and use it to investigate the colour of their own of local smog-glaze and air quality.

As well as exhibiting their tableware and research process at CAL, Smogware will also be hosting ‘Tea for Two’ events during the three days of the fair, inviting thinkers from various fields to discuss ways to combat air pollution over a cup of tea.

Smogware has collaborated with researchers and ceramic makers throughout the Netherlands, and cities around the world including Milan, Berlin, Beijing - and now London. Its aim is to build a network of like-minded practitioners to investigate and campaign about this global problem. The dream is to encourage behaviour change and reduce air pollution to nil.

Organised by the Craft Potters Association, and taking place once again in the grand concourse of Central Saint Martins, Ceramic Art London returns after an absence of two years with a three-day fair, the previous three editions of which sold out despite increased capacity, with international ticket sales reaching 33 countries. Featuring 92 leading makers from 11 different countries and with price points ranging between  £20 – £5000, Ceramic Art London is the place to see and buy the best contemporary ceramics, from the functional and decorative to the abstract and architectural.

The Craft Potters Association of Great Britain (CPA) was established in 1958, and is the national body representing ceramic artists in the UK. Its aim is to advance and encourage the creation of fine works in ceramics, and to foster and extend the interests of the public in such objects and to promote their value in society. The CPA was founded by a small group of potters as a Friendly Society and now has some 150 Fellows, 200 Professional and 1,000 Associate members, including internationally recognised makers as well as many potters at the start of their careers. If you are interested in joining the CPA either as an Associate Member or as a Professional Member (membership by selection) please contact [email protected] for details.

The CPA owns and operates the Contemporary Ceramics Centre, the leading studio ceramics gallery in central London.  Located in premises at 63 Great Russell Street, opposite The British Museum, the gallery has a revolving spectrum of members’ work on display and available for sale, with a dedicated gallery space for solo and group exhibitions.

Ceramic Review
The CPA also publishes Ceramic Review: The International Magazine of Ceramic Art and Craft. Published bimonthly, it is recognised as one of the world’s leading journals on contemporary ceramics and has been printed continuously